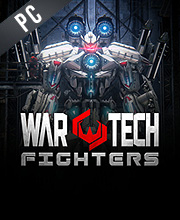 It's a digital key that allows you to download War Tech Fighters directly to PC from the official Platforms.

How can I find the best prices for War Tech Fighters CD keys?

Allkeyshop.com compares the cheapest prices of War Tech Fighters on the digital downloads market to find the best sales and discount codes on trusted stores.

War Techs are giant new technology Mechs that bring combat to a whole new level. Here the rebel colonies Ares and Hebos decided to join forces and fight against the Zatros empire.

Your War Techs are fully customizable that include hundreds and thousands of mech parts to choose from. These include weapons, shields as well as colors. You can either choose to equip long range weapons like guns or perhaps go at it face to face with swords and shields. Parts of your War Techs are also upgradable with over 150+ parts to upgrade to. Players are also able to create weapons with the game’s research and development. Don’t forget to level up your pilot as well in order for him/her to gain attack points or defense bonuses.

You can also play as Captain Nathan Romanis in the game’s single player campaign and finish all 12 missions. A survival mode is also available where you can test your limits and earn a prize.

Zoom 1m 3m 1y All
Track product
EU STEAM CD KEY: Requires an EUROPEAN IP address or you must activate it with a VPN (Virtual Private Network) in order to play War Tech Fighters. Might have languages restrictions or language packs. Read the description on the store game page to know if the EU IP is only needed for activation or for playing also (maybe on EU Servers). Most of the stores offer you their help, or show you how to do this with a tutorial to follow.
STEAM CD KEY : Use the Steam Key Code on Steam Platform to download and play War Tech Fighters. You must login to your Steam Account or create one for free. Download the (Steam Client HERE). Then once you login, click Add a Game (located in the bottom Left corner) -> Activate a Product on Steam. There type in your CD Key and the game will be activated and added to your Steam account game library.
Standard Edition
Compare Choose & Buy Download (743)

I hope this game can be as good as i am anticipating and wow me .

I think this game will not be so good as it was marketed. I hope for the best.