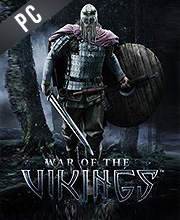 What is War of the Vikings CD key?

It's a digital key that allows you to download War of the Vikings directly to PC from the official Platforms.

How can I find the best prices for War of the Vikings CD keys?

Allkeyshop.com compares the cheapest prices of War of the Vikings on the digital downloads market to find the best sales and discount codes on trusted stores.

War of the Vikings is an action videogame developed at Fatshark and released by Paradox Interactive. It was developed by the same team that made War of the Roses.

Fast and brutal skill based gameplay, that will get your adrenaline rushing through your body as arrows, javelins and throwing axes fly by your head! Featuring a smooth gameplay, manageable controls and stunning graphics, the environment really is perfect for a murderous bloodbath.

Outsmarting people is the key to victory in this game, and you’ll get fight till the bitter end! This game is one heck of a good game play experience, since most of the players are mature gamers. A must for history lovers and viking-enthusiast!

STEAM CD KEY : Use the Steam Key Code on Steam Platform to download and play War of the Vikings. You must login to your Steam Account or create one for free. Download the (Steam Client HERE). Then once you login, click Add a Game (located in the bottom Left corner) -> Activate a Product on Steam. There type in your CD Key and the game will be activated and added to your Steam account game library.
Bundle
Standard Edition