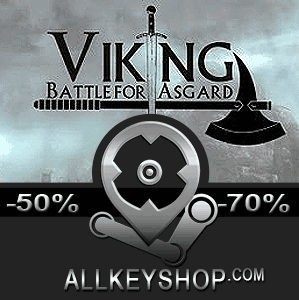 You can participate to these tests by adding comments about your digital download purchase in the store review page. Enjoy the best deals for Viking Battle For Asgard CD Key with Allkeyshop.com!

Viking: Battle for Asgard is an action–adventure hack and slash video game developed by The Creative Assembly and published by Sega.

Viking: Battle for Asgard let’s you enter a twisted mythological world overrun with demonic warriors unleashed by Hel, the Norse goddess of death. You will take on the role of Skarin, a rage-fueled Viking hero. Your role is to wage an all-out war to free mankind from the grip of evil and ultimate annihilation. Enemies will suffer graphic dismemberment with disturbing realism from your melee, ranged and magical attacks.

As Skarin, you will experience unparalleled battle scenes. You will be leading the charge in a titanic clash between powerful gods and mere men. War on an unprecedented scale will rage across a beautifully realized Viking landscape. This game re-invigorates the game with outstanding visuals taking full advantage of a modern gaming hardware.

Explore, uncover and fight your way across huge worlds full of combat, exploration and quests. Enjoy intensely physical melee combat. Dismember enemies with deadly combat moves in a whirlwind of death and destruction.

You will have an option to tame dragons and command them to rain fire upon your enemies and call on magic and the power of the gods to win! Everything is a blend of good old RPG plus the button mashing . A good game for it’s price.

Be the first one to write a review about Viking Battle For Asgard !

Limited offer, take it while you can, not gonna last for long!