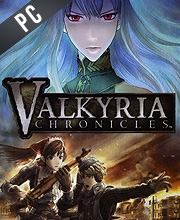 What is Valkyria Chronicles CD key?

It's a digital key that allows you to download Valkyria Chronicles directly to PC from the official Platforms.

How can I find the best prices for Valkyria Chronicles CD keys?

Allkeyshop.com compares the cheapest prices of Valkyria Chronicles on the digital downloads market to find the best sales and discount codes on trusted stores.

Valkyria Chronicles is a tactical role-playing game developed and published by Sega for the PlayStation 3 in 2008 while its PC counterpart was released in November 2014.

The story takes place in Europa, loosely based on Europe during the early years of World War II.  Ragnite ore, which takes the place of petroleum in the game setting becomes the cause of a great war. Europa is now divided by two powers: the Empire and the Federation.

The Empire formulated a plot to invade the small neutral country of Gallia, located between the two superpowers’ territories, in an attempt to secure Ragnite ore and other precious resources. In the middle this chaos a hero named Welkin, and his fellow soldiers of the Federation’s Seventh Platoon, are fighting back against the invasion and the Empires attempts to unify the continent under its wings.

The game features “CANVAS” graphics engine: A unique engine that produces breath taking images that look like watercolour paintings in motion, making the game visually appealing. It also features “BLiTZ” tactical battle system in which players can strategically maneuver while maintaining its essences as an RPG. The game is fully customizable allowing players to create a variety of platoons to suit each battle’s needs. It’s a really awesome game and promises hours of endless fun.

Zoom 1m 3m 1y All
Track product
EU STEAM CD KEY: Requires an EUROPEAN IP address or you must activate it with a VPN (Virtual Private Network) in order to play Valkyria Chronicles. Might have languages restrictions or language packs. Read the description on the store game page to know if the EU IP is only needed for activation or for playing also (maybe on EU Servers). Most of the stores offer you their help, or show you how to do this with a tutorial to follow.
STEAM GIFT : A Steam gift is a one-time transfer you receive. You activate and install Valkyria Chronicles to play on Steam, it is a non-refundable game that stays in your Steam games collection. Please read the store description about any language or region restrictions.
STEAM CD KEY : Use the Steam Key Code on Steam Platform to download and play Valkyria Chronicles. You must login to your Steam Account or create one for free. Download the (Steam Client HERE). Then once you login, click Add a Game (located in the bottom Left corner) -> Activate a Product on Steam. There type in your CD Key and the game will be activated and added to your Steam account game library.
STEAM KEY ROW : It means for Rest Of the World countries which are not concerned by the region restrictions. This product can't be purchased and activated in Several countries. Please read the store description to know the full list of countries which are concerned. Use the key to Download and play Valkyria Chronicles on Steam.
Windows 10 Global : This is an Worldwide Microsoft code to play on PC for Worldwide . You need to have installed Windows 10 Anniversary Edition update on your PC. Log into your Microsoft account to download and play. Read closely the description given by the store to activate your game.
Bundle
Standard Edition
Ultimate Collection
Compare Choose & Buy Download (743)

The game has anime graphics but don’t let it steer you away. I definitely recommend it, one of my favourite game.