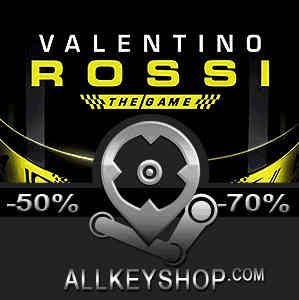 What is Valentino Rossi The Game CD key?

It's a digital key that allows you to download Valentino Rossi The Game directly to PC from the official Platforms.

How can I find the best prices for Valentino Rossi The Game CD keys?

Allkeyshop.com compares the cheapest prices of Valentino Rossi The Game on the digital downloads market to find the best sales and discount codes on trusted stores.

Celebrate Valentino Rossi’s career in Valentino Rossi The Game. This is your chance to be in the shoes of the 9 time world champion by reliving all the important stages of his amazing career.

First off, get to visit Rossi’s VR|46 Academy. Here, you can hone your skills as Rossi himself will serve as your mentor and in no time you will surely be a true MotoGP racer. You will also be able to race against all the teams and riders of the 2016 Championships and the 2015 Championships as well.

There will be around 290 riders and 47 tracks to race, making this the largest MotoGP game ever!

Make sure to visit Rossi’s MotorRanch in Tavullia to Sharpen your skills further not only on two wheels but also oin four wheels as well.

In addition to this you can get to relive 20 years of the MotoGP history from the different MotoGP classes of 1996 to the current 2016.

EU STEAM CD KEY: Requires an EUROPEAN IP address or you must activate it with a VPN (Virtual Private Network) in order to play Valentino Rossi The Game. Might have languages restrictions or language packs. Read the description on the store game page to know if the EU IP is only needed for activation or for playing also (maybe on EU Servers). Most of the stores offer you their help, or show you how to do this with a tutorial to follow.
STEAM GIFT : A Steam gift is a one-time transfer you receive. You activate and install Valentino Rossi The Game to play on Steam, it is a non-refundable game that stays in your Steam games collection. Please read the store description about any language or region restrictions.
STEAM CD KEY : Use the Steam Key Code on Steam Platform to download and play Valentino Rossi The Game. You must login to your Steam Account or create one for free. Download the (Steam Client HERE). Then once you login, click Add a Game (located in the bottom Left corner) -> Activate a Product on Steam. There type in your CD Key and the game will be activated and added to your Steam account game library.
Special Edition
Standard Edition