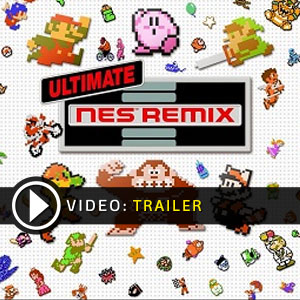 It's a digital key that allows you to download Ultimate NES Remix directly to Nintendo 3DS directly from Nintendo eShop.

How can I find the best prices for Ultimate NES Remix on Nintendo 3DS ?

Allkeyshop.com compares the cheapest prices of Ultimate NES Remix on the digital downloads market to find the best sales and discount codes on trusted stores.

Ultimate NES Remix is an edited compilation and developed by Nintendo.

In this game, you will rediscover the pleasure of many games (16 in total) that marked the early days of Nintendo and gaming in general.

The game is composed of challenges taken from vintage games giving you a limited amount of time to complete the challenge presented to you.

The other highlight of the game is being able to access an online ranking including all European players; so you can compare yourself and compare your scores against others.

A championship fashion available early in the game is also very significant.

The Mario Bross Speed mode offers a turbocharged version of the original game which is quite addictive. You will be filled the nostalgic with this memorable game!

In short, here is an unusual game concept and very valuable for old players, but is also likely to show our youngsters how games were made and how we played.

Ultimate NES Remix is very nice game …
i want play this game … please help me …
and thank you so much .