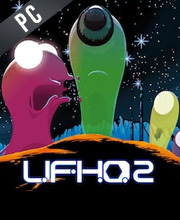 What is UFHO2 CD key?

It's a digital key that allows you to download UFHO2 directly to PC from the official Platforms.

How can I find the best prices for UFHO2 CD keys?

Allkeyshop.com compares the cheapest prices of UFHO2 on the digital downloads market to find the best sales and discount codes on trusted stores.

UFHO2 is an indie strategy game that also has a mix of board game elements in it. Developed by Tiny Colossus and Ciro Continisio and Published by Tiny Colossus, UFHO2 promises players a gameplay that will certainly put your brain, strategy and tactics to the test.

You will play as an alien who navigates a maze made up of hexagons. Plan your next turn, think and act fast, and outdo your opponents as every move affects the outcome of your game. You can play the game either in single player Story Mode with 10 unique planets and 2 different storylines (a total of more than 25 matches), or in Local Multiplayer Mode with your friends.

There’s also a Situation Mode where you can show off your tactical skills in super-hard matches (if you’re up for the challenge, that is). You also get to unlock 10 different alien races, with each one having its own in-game power. There are also 6 guest appearances from characters of World of Goo, Super Crate Box, Bit.Trip, Blocks That Matter, Gish, and Cortex Command.

More features such as a cross-platform multiplayer mode and more characters are to come soon.

STEAM CD KEY : Use the Steam Key Code on Steam Platform to download and play UFHO2. You must login to your Steam Account or create one for free. Download the (Steam Client HERE). Then once you login, click Add a Game (located in the bottom Left corner) -> Activate a Product on Steam. There type in your CD Key and the game will be activated and added to your Steam account game library.
Standard Edition