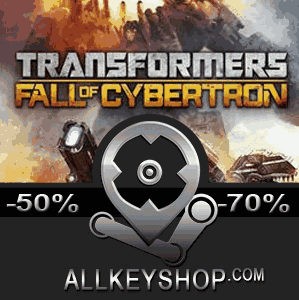 What is Transformers Fall of Cybertron CD key?

It's a digital key that allows you to download Transformers Fall of Cybertron directly to PC from the official Platforms.

How can I find the best prices for Transformers Fall of Cybertron CD keys?

Allkeyshop.com compares the cheapest prices of Transformers Fall of Cybertron on the digital downloads market to find the best sales and discount codes on trusted stores.

Transformers: Fall of Cybertron is a third-person shooter action game developed by High Moon Studios and published by Activision. It was made as a sequel to the famous game Transformers: War for Cybertron and directly continues the events that transpired on the previous game.

Transformers: Fall of Cybertron lets you experience the final days of the planet Cybertron, where you will be trapped in the darkest hours of the apocalyptic war between the AUTOBOTS and DECEPTICONS. The Autobots will struggle to defeat their Decepticon foes in a war for their home planet of Cybertron. Go on an adrenaline-fueled journey through a wide range of missions and massive environments designed around each character’s unique abilities.

You can play as a variety of Transformers characters, including Grimlock’s almost indestructible T-Rex form and the legendary Combaticons forming into the colossal Bruticus. You can pick a bot from both factions and experience the most epic battles, leading to their legendary exodus from their homeworld.

You can create your own personalized character and weaponry with the most advanced and in-depth customization ever before seen in a Transformers game. This game offers plenty of entertainment for the fans and non-fans for the Transformers franchise.

STEAM GIFT : A Steam gift is a one-time transfer you receive. You activate and install Transformers Fall of Cybertron to play on Steam, it is a non-refundable game that stays in your Steam games collection. Please read the store description about any language or region restrictions.
STEAM CD KEY : Use the Steam Key Code on Steam Platform to download and play Transformers Fall of Cybertron. You must login to your Steam Account or create one for free. Download the (Steam Client HERE). Then once you login, click Add a Game (located in the bottom Left corner) -> Activate a Product on Steam. There type in your CD Key and the game will be activated and added to your Steam account game library.
Standard Edition
Compare Choose & Buy Download (583)

Its the best to play this game on ps3. Giant robotic life forms, Transformers are at civil war. Two factions, the Autobots and the Decepticons, fight for control of their home world. They are Cybertron 22 Autobots, 20 Deceptions autobots.