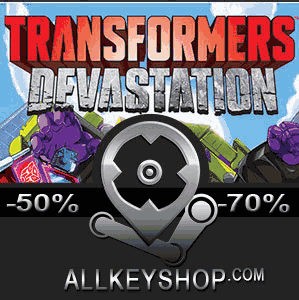 What is Transformers Devastation CD key?

It's a digital key that allows you to download Transformers Devastation directly to PC from the official Platforms.

How can I find the best prices for Transformers Devastation CD keys?

Allkeyshop.com compares the cheapest prices of Transformers Devastation on the digital downloads market to find the best sales and discount codes on trusted stores.

Transformers: Devastation is a action beat’em up game developed by PlatinumGames and published by Activision.

Based off theTransformers franchise you will be able to battle as one of five Autobots against the evil Decepticon. Megatron has discovered a way to eliminate life on planet Earth and turn the planet into metal. It is up to the Autobots to stop him and save the world from this destructive power.

There are 5 difficulty levels in this fast paced game allowing the player to switch between robot and vehicle for the most efficient use of force for battles against the Decepticon force. Each of the 5 Autobots has a different style of battle that is reflective of their different personalities, for example Bumblebee has the fastest attack but sacrifices a bit in power and the damage that he does.

With an immense 3D world to explore, heavily influenced by the Transformer movies, this game conveys a continuation of the storyline but with you in control of the action. Visually stimulating and with the added bonus of the original voice actors brought into the game you are sure to become immersed in this unique merging of movie and game. Who will win in the end ? Will you have what it takes to disrupt Megatron’s plans and save the world?

Zoom 1m 3m 1y All
Track product
EU STEAM CD KEY: Requires an EUROPEAN IP address or you must activate it with a VPN (Virtual Private Network) in order to play Transformers Devastation. Might have languages restrictions or language packs. Read the description on the store game page to know if the EU IP is only needed for activation or for playing also (maybe on EU Servers). Most of the stores offer you their help, or show you how to do this with a tutorial to follow.
STEAM GIFT : A Steam gift is a one-time transfer you receive. You activate and install Transformers Devastation to play on Steam, it is a non-refundable game that stays in your Steam games collection. Please read the store description about any language or region restrictions.
STEAM CD KEY : Use the Steam Key Code on Steam Platform to download and play Transformers Devastation. You must login to your Steam Account or create one for free. Download the (Steam Client HERE). Then once you login, click Add a Game (located in the bottom Left corner) -> Activate a Product on Steam. There type in your CD Key and the game will be activated and added to your Steam account game library.
XBOX ONE GAME CODE : Use the Digital Code received by mail in your Xbox One account to download Transformers Devastation from the Xbox Live. Internet connection is required. Please read the store description about any language or region restrictions.
Standard Edition
Compare Choose & Buy Download (759)