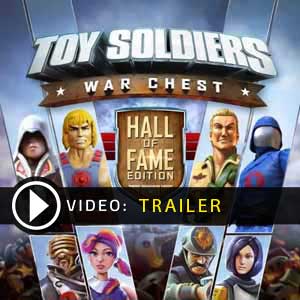 It's a digital key that allows you to download Toy Soldiers War Chest directly to PC from the official Platforms.

How can I find the best prices for Toy Soldiers War Chest CD keys?

Allkeyshop.com compares the cheapest prices of Toy Soldiers War Chest on the digital downloads market to find the best sales and discount codes on trusted stores.

Basically this game is a tower defense, where players prevent enemy units from reaching the toybox by building and upgrading turrets. This game offers fast-paced genre-bending mix of strategy, defense and action gameplay brings four unique toy factions . Lead from the strategic level, placing and upgrading turrets, or take direct command of your units and heroes to deliver.

You start with four different heroes you pick one and along comes their army (per map). Each play is unique and completely different from the other. You earn coins per game that allows you to purchase upgrades. The upgrades are also randomly unlocked after each win.

Part castle defense, part battlefront, enough collectibles to keep you busy for awhile and a new take on a tired genre sums up to a lot of fun. The combat is fast but manageable, the graphics are clear and really good for something so simple. Really fun game, built a lot like the past iterations but with a lot more options and gameplay.