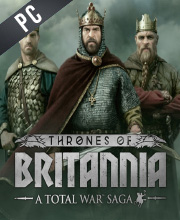 What is Total War Saga Thrones Of Britannia CD key?

It's a digital key that allows you to download Total War Saga Thrones Of Britannia directly to PC from the official Platforms.

How can I find the best prices for Total War Saga Thrones Of Britannia CD keys?

Allkeyshop.com compares the cheapest prices of Total War Saga Thrones Of Britannia on the digital downloads market to find the best sales and discount codes on trusted stores.

Total War Saga: Thrones of Britannia is an action, strategy video game that is developed by Creative Assembly and published by SEGA.

From the award-winning A Total War Saga comes a new real-time battle, turn-based campaign called the Thrones of Britannia. Here, get to play as Anglo-Saxons, Gaelic clans or the Viking settlers.

Bringing players back to the year 878 AD where the Norse warlords are at peace across Britain. This, however, is a time of opportunity for the kings of Wales, Ireland, Scotland, and Britain.

The game will give players a chance to rewrite history by defining the future of modern Britain. Choose from the ten playable factions, forge alliances, manage settlements, raise armies and go on campaigns of conquest!

Get to enjoy the “classic” Total War gameplay but redefined with new updates to the Total War mechanics. There will be multiple routes to victory so choose your strategy wisely. Get to explore and conquer the expansive map of the British Isles.

Choose your kingdom and bring to your victory!

Pre-Order: Get Total War Saga: Thrones Of Britannia now to claim 10% off! (Can be different or change over time for each seller. Please refer to the seller’s website)

Zoom 1m 3m 1y All
Track product
EU STEAM CD KEY: Requires an EUROPEAN IP address or you must activate it with a VPN (Virtual Private Network) in order to play Total War Saga Thrones Of Britannia. Might have languages restrictions or language packs. Read the description on the store game page to know if the EU IP is only needed for activation or for playing also (maybe on EU Servers). Most of the stores offer you their help, or show you how to do this with a tutorial to follow.
STEAM GIFT : A Steam gift is a one-time transfer you receive. You activate and install Total War Saga Thrones Of Britannia to play on Steam, it is a non-refundable game that stays in your Steam games collection. Please read the store description about any language or region restrictions.
STEAM CD KEY : Use the Steam Key Code on Steam Platform to download and play Total War Saga Thrones Of Britannia. You must login to your Steam Account or create one for free. Download the (Steam Client HERE). Then once you login, click Add a Game (located in the bottom Left corner) -> Activate a Product on Steam. There type in your CD Key and the game will be activated and added to your Steam account game library.
STEAM KEY ROW : It means for Rest Of the World countries which are not concerned by the region restrictions. This product can't be purchased and activated in Several countries. Please read the store description to know the full list of countries which are concerned. Use the key to Download and play Total War Saga Thrones Of Britannia on Steam.
Standard Edition
Compare Choose & Buy Download (759)

Nice game. It looks like it is polished all in all. A must buy!

Another total war game. This time with extra details! Ccome and get it!

Another total war game. This time with extra details! Ccome and get it!

ooooooH AMAZING, IM IMPRESING FOR ALL THE PEOPLE PARTICIPATED IN THIS PAGE

prices are good on 2kgame, i have a coupon but i will not use it…