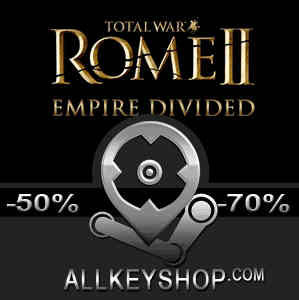 It's a digital key that allows you to download Total War ROME 2 Empire Divided directly to PC from the official Platforms.

How can I find the best prices for Total War ROME 2 Empire Divided CD keys?

Total War: ROME II – Empire Divided is a strategy video game developed by Creative Assembly and published by SEGA. This is a downloadable content and it requires the base game in order to play it.

Step into a new grand-scale Campaign Pack of Total War: ROME II. Set in 270 AD, and the Roman Empire is in the gravest crisis yet. This is due to incompetent emperors that are vying for power. Of course, this won’t go unnoticed, and the barbarian tribes are taking this opportunity to plunder the Roman empire.

Not only are the barbarians the ones to catch wind of this, but the Sassanids of the east, are aiming for the Roman lands as well.

Rome, once the most powerful of them all must take defense and because of their current situation, is not that strong at all.

The game features a gameplay that is a critical turning-point for Rome. There are ten different factions available that are across five cultural groups. Heroic Factions are also added, these are special factions that have elaborate victory conditions, famous leaders, and crafted event chains. New period-specific events, new campaign features, and restructured technologies and unique new buildings are available.

The future of the Roman Empire is in your hands! Will it rise up from the ashes or will you be the cause of its final downfall?

EU STEAM CD KEY: Requires an EUROPEAN IP address or you must activate it with a VPN (Virtual Private Network) in order to play Total War ROME 2 Empire Divided. Might have languages restrictions or language packs. Read the description on the store game page to know if the EU IP is only needed for activation or for playing also (maybe on EU Servers). Most of the stores offer you their help, or show you how to do this with a tutorial to follow.
STEAM GIFT : A Steam gift is a one-time transfer you receive. You activate and install Total War ROME 2 Empire Divided to play on Steam, it is a non-refundable game that stays in your Steam games collection. Please read the store description about any language or region restrictions.
STEAM CD KEY : Use the Steam Key Code on Steam Platform to download and play Total War ROME 2 Empire Divided. You must login to your Steam Account or create one for free. Download the (Steam Client HERE). Then once you login, click Add a Game (located in the bottom Left corner) -> Activate a Product on Steam. There type in your CD Key and the game will be activated and added to your Steam account game library.
STEAM KEY ROW : It means for Rest Of the World countries which are not concerned by the region restrictions. This product can't be purchased and activated in Several countries. Please read the store description to know the full list of countries which are concerned. Use the key to Download and play Total War ROME 2 Empire Divided on Steam.
DLC

Very great DlC which add many Attila dynamics exploring a not so common period.

its a really good dlc that adds a period in history that is quite interesting, I love the feel of the new factions and the battles. don’t really care much about banditry and cults but they’re neat none the less. I’d say this dlc is worth

How many internet dudes are going to try to recreate Caesar’s Legion in Total War? Or has that been done already?

If you are a Civilization and age of empire FAn, then go ahead and buy it, you won’t regret it.