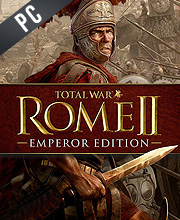 It's a digital key that allows you to download Total War Rome 2 Emperor Edition directly to PC from the official Platforms.

How can I find the best prices for Total War Rome 2 Emperor Edition CD keys?

Total War: Rome II – Emperor Edition really shows how much the title from The Creative Assembly has evolved since it was originally delivered and the way the entire experience has been updated based on the needs of the community and the cool ideas of the development team.

Fixes big and small all come together to make Rome II a salvaged, quality RTS that sits quite comfortably at the feet of the games that came before it, even if it doesn’t quite manage to equal them.

Rise of the Republic Campaign Pack

The Desert Kingdoms Culture Pack adds 4 playable factions native to the deserts of Africa and Arabia — Meroe, Nabatae, Saba and Numidia. Each faction comes with its own perks, infantry and cavalry units,  and faction traits. They also introduce new building chains and technology trees that set them apart from the other factions.

Empire Divided adds a new grand-scale playable campaign set during the third century, a critical turning-point for Rome. The empire is unstable and both internal powers and barbarian tribes are taking advantage of its weakened state. Pick from 10 playable factions, including new Heroic Factions headed by famous leaders and requiring elaborate victory conditions. Manage new features such as plagues and bandits, and master the restructured technology trees with new unique buildings.

Wrath of Sparta adds a new playable campaign focused on the Hellenic World in 432 BC. The Greek City-States are in disarray as Athens’ arrogance causes friction with Sparta, Korinthos and the Boiotian League. Pick from 4 playable factions, participate in the Panhellenic games and festivals, discover new technologies, and command new army and naval rosters.

EU STEAM CD KEY: Requires an EUROPEAN IP address or you must activate it with a VPN (Virtual Private Network) in order to play Total War Rome 2 Emperor Edition. Might have languages restrictions or language packs. Read the description on the store game page to know if the EU IP is only needed for activation or for playing also (maybe on EU Servers). Most of the stores offer you their help, or show you how to do this with a tutorial to follow.
EUROPEAN STEAM GIFT : It’s a steam gift for Europe which requires an European IP address to activate and to play Total War Rome 2 Emperor Edition on Steam. Read carefully the store description about region and language restrictions.
STEAM GIFT : A Steam gift is a one-time transfer you receive. You activate and install Total War Rome 2 Emperor Edition to play on Steam, it is a non-refundable game that stays in your Steam games collection. Please read the store description about any language or region restrictions.
STEAM CD KEY : Use the Steam Key Code on Steam Platform to download and play Total War Rome 2 Emperor Edition. You must login to your Steam Account or create one for free. Download the (Steam Client HERE). Then once you login, click Add a Game (located in the bottom Left corner) -> Activate a Product on Steam. There type in your CD Key and the game will be activated and added to your Steam account game library.
Complete Pack
Emperor Edition

We have made the necessary changes. Thanks for your report.

339.2 hrs on record
POSTED: 5 MARCH
This game has come a long way since its initial release date, and I have to say it is almost a completely different game from what it was when it first came out. Im just going to go over a few pros and cons about this game and try to elaborate on each one a little, so here goes nothing (This is in no particular order, just the order that came to mind first).