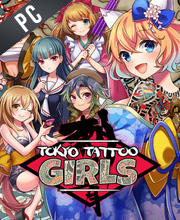 It's a digital key that allows you to download Tokyo Tattoo Girls directly to PC from the official Platforms.

How can I find the best prices for Tokyo Tattoo Girls CD keys?

Allkeyshop.com compares the cheapest prices of Tokyo Tattoo Girls on the digital downloads market to find the best sales and discount codes on trusted stores.

Tokyo Tattoo Girls is a strategy video game that is developed by Sushi Typhoon Games and published by NIS America Inc.

Ravaged by an unexpected calamity, the government of Tokyo has abandoned the area and blocked it with a barricade.

Furthermore, an abnormality has risen in Tokyo. Colorful tattoos suddenly appeared on the bodies of the girls who survived the calamity. These tattoos granted the girls extraordinary supernatural powers. Due to their difference in the society, the tattooed girls organized themselves into hierarchical groups and was called “Kumi”.

To avoid conflicts, an agreement was established and the “union of the 23 wards of Tokyo” was formed.

Years have passed, rumors spread throughout Tokyo and whoever defeats the union, they or he/she will be granted the rights to leave Tokyo.

A tattoo artist with the dream of leaving Tokyo appeared and joins with a capable partner with similar ambitions.

This game features the power of tattoos, where you can choose your character, develop abilities by giving her powerful tattoos and help you escape Tokyo.

Engage in combat to defeat the head of each of the 23 wards to escape the city.

Zoom 1m 3m 1y All
Track product
STEAM CD KEY : Use the Steam Key Code on Steam Platform to download and play Tokyo Tattoo Girls. You must login to your Steam Account or create one for free. Download the (Steam Client HERE). Then once you login, click Add a Game (located in the bottom Left corner) -> Activate a Product on Steam. There type in your CD Key and the game will be activated and added to your Steam account game library.
Bonus Edition
Limited Edition
Standard Edition
Compare Choose & Buy Download (772)