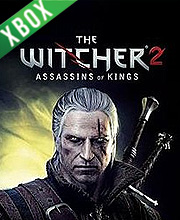 What is The Witcher 2 Game Code?

It's a digital key that allows you to download The Witcher 2 directly to Xbox 360 from Xbox Live.

Allkeyshop.com compares the cheapest prices of The Witcher 2 on the digital downloads market to find the best sales and discount codes on trusted stores.

The unimaginable chaos has arrived. Behind the scenes, powerful forces conflict in a struggle for influence and power. The Northern Kingdoms prepare to fight. However, advancing forces are insufficient to thwart a murderous scheme. Immerse yourself in a vast, intensely emotional, non-linear tale set in a fantasy universe unlike any other.

The Witcher 2 is a highly recommended for those seeking a mature and visceral role-playing experience.

The Witcher 2: Enhanced Edition is one of the most engaging and immersive games of this console generation, drawing players into a complex narrative, full of character, an excellent script and a rich gaming environment.