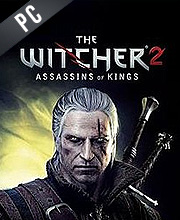 What is The Witcher 2 CD key?

It's a digital key that allows you to download The Witcher 2 directly to PC from the official Platforms.

How can I find the best prices for The Witcher 2 CD keys?

Allkeyshop.com compares the cheapest prices of The Witcher 2 on the digital downloads market to find the best sales and discount codes on trusted stores.

GOG.COM CD KEY : You need to register on Gog.com, then use the GOG Key to download and activate your game to play The Witcher 2.
STEAM CD KEY : Use the Steam Key Code on Steam Platform to download and play The Witcher 2. You must login to your Steam Account or create one for free. Download the (Steam Client HERE). Then once you login, click Add a Game (located in the bottom Left corner) -> Activate a Product on Steam. There type in your CD Key and the game will be activated and added to your Steam account game library.
PUBLISHER WEBSITE CD KEY: Use the CD Key Code to download directly on the Official Website or from the store to play The Witcher 2. Follow the instructions given by the store. Verify languages available and possible region restrictions before buying.
STEAM GIFT : A Steam gift is a one-time transfer you receive. You activate and install The Witcher 2 to play on Steam, it is a non-refundable game that stays in your Steam games collection. Please read the store description about any language or region restrictions.
ORIGIN CD KEY : Use the Origin Key Code (Electronic Arts - EA) on Origin Platform to download and play The Witcher 2. You have to login to your Origin Account or create one for free. Download and install the Origin Software HERE) then you can activate the game on it. Once installed, start Origin, click on the Origin Tab and click on Redeem Product Code and just enter the key. The game will appear in your My games list.
Enhanced Edition. Read the store description to know the content.
Standard Edition. Read the store description to know the content.

After enjoying & completing Witcher 1, I was surprised to see Witcher 2 at such a bargain price, even for the Enhanced edition. This game continues the adventures of Geralt, human with special powers who hunt monsters for a living. The game has you traveling around the continent trying to find a king slayer whilst uncovering a truth. You meet a lot of interesting characters as well as manage your romances. The voice acting is superb as well as the drama & storyline. The game works well with gamepad controller and, unlike most RPG games, this game doesn't require you to be a RPG-nerd/buff. From start to finish the game was quite relaxing as well as having good intense monster fights. Geralt humor & personality is what makes Witcher series shine. He has good wits which save him from nasty consequences, but also uses dead-pan humor and charm to diffuse situations. All in all, Witcher 2 is surely a must have to add to your game collection for this bargain price.

I'll start by saying this is a great series I would first recommend to play the first game before this one. It has a great story, even by today's standards, the world is well made and very detailed and you could easily lose lots of hours with this game. The graphics looks really good, the world is very detailed. The sound and voice acting are great too, and they help you get lost in this world. Nothing sounds out of place.

The gameplay, is way better than the first game, and you can see how it evolved to the perfect gameplay from wild hunt. but coming back to this, the combat is fluid and filled with action. Even tough you are allowed to explore any place you want, pretty much you will go to one region to another as the story progresses. It's not really the feeling of an open world game with loading screens between regions.

The game will make you have some choices that greatly impact the story an how it evolves. One of the greatest things is that you can import the saves from this game to wild hunt and see how your choices will continue to impact some of the gameplay aspects of the next game.

0
Review The Witcher 2 See all 2 reviews

Less than 1 euro for an amazing game. Recommended!

Look at those prices, under 1€ FOR SUCH AN AMAZING GAME, HIGHLY RECOMMENDED!

Excellent price for one of the best rpg titles ever, this is one of the games that are simply to cheap for their value! Definitely worth buying! Enjoy!

shame there isn;t a bundle with all Witcher games included. Would totally buy it, since reviews are quite ok.

Better controls than the first one.