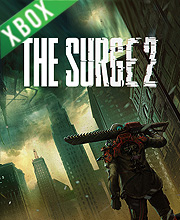 What is The Surge 2 Game Code?

It's a digital key that allows you to download The Surge 2 directly to Xbox One from Xbox Live.

How can I find the best prices for The Surge 2 on Xbox one?

Allkeyshop.com compares the cheapest prices of The Surge 2 on the digital downloads market to find the best sales and discount codes on trusted stores.

The Surge 2 is the follow-up to the 2017 hardcore action RPG from Deck 13 and Focus Home Interactive. The sequel is set in an all-new environment sporting more ambitious level design thanks to the upgraded engine. The dynamic limb targeting system returns, this time expanded with more options allowing for even more brutal and tactical combat. Also, take on new enemies and bosses with more weapons, implants and the newly-added drones, while utilizing even more abilities to suit your combat style.