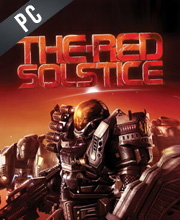 What is The Red Solstice CD key?

It's a digital key that allows you to download The Red Solstice directly to PC from the official Platforms.

How can I find the best prices for The Red Solstice CD keys?

Allkeyshop.com compares the cheapest prices of The Red Solstice on the digital downloads market to find the best sales and discount codes on trusted stores.

The Red Solstice is a top-down, tactical, squad based eight-player co-op survival shooter video game, developed and published by Ironward.

A fantasticly constructed team oriented survival type game. The game is set in the distant future on Mars where the player must join the fight by leading a customized squad and exhaust any means necessary in order to conquer and survive.

The player gets to choose one of the 8 distinct, customizable classes to plays as. Explore every part of the huge map to complete randomized objectives and generated events for an hour to make a mark. Kill enemies, help allies, set up turrets, destroy enemy camps, set traps and much more.

The game has three mods- single player story, survival and multiplayer. All of which offers just the right amount of complexity with plenty of content, scary atmosphere and good community. All in all, The Red Solstice is an awesome RTS and is hardcore as it should be!

EU STEAM CD KEY: Requires an EUROPEAN IP address or you must activate it with a VPN (Virtual Private Network) in order to play The Red Solstice. Might have languages restrictions or language packs. Read the description on the store game page to know if the EU IP is only needed for activation or for playing also (maybe on EU Servers). Most of the stores offer you their help, or show you how to do this with a tutorial to follow.
STEAM GIFT : A Steam gift is a one-time transfer you receive. You activate and install The Red Solstice to play on Steam, it is a non-refundable game that stays in your Steam games collection. Please read the store description about any language or region restrictions.
STEAM CD KEY : Use the Steam Key Code on Steam Platform to download and play The Red Solstice. You must login to your Steam Account or create one for free. Download the (Steam Client HERE). Then once you login, click Add a Game (located in the bottom Left corner) -> Activate a Product on Steam. There type in your CD Key and the game will be activated and added to your Steam account game library.
Standard Edition