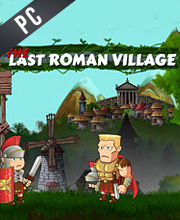 What is The Last Roman Village CD key?

It's a digital key that allows you to download The Last Roman Village directly to PC from the official Platforms.

How can I find the best prices for The Last Roman Village CD keys?

Allkeyshop.com compares the cheapest prices of The Last Roman Village on the digital downloads market to find the best sales and discount codes on trusted stores.

The Last Roman Village is an adventure, strategy videogame that is developed and published by Twin Stone Studio.

The Roman Empire is no more and only the last Roman village is left. You will play as General Marcus Aurelius who must do everything in his power to preserve as well as protect the last remaining piece of Roman history. There will be enemies coming at you from both sides which is why you must keep very good balance and defense. Make the best decisions to make sure that the last Roman village is here to stay.

Get to build more than 10 buildings and upgrade them as well. You will also get to train and upgrade your Roman soldiers to better protect your village. There will be a wide variety of enemies to defeat including goblins, skeletons, orcs, trolls, and so much more. You should also ready yourself and your village as there are 10 unique bosses to defeat.

Play in the Wheels of Soldier and get to win some awesome surprises like a pet dog, stronger walls, 10% more on attack and so much more. Make sure that the Roman empire will not be forgotten with The Last Roman Village.

STEAM CD KEY : Use the Steam Key Code on Steam Platform to download and play The Last Roman Village. You must login to your Steam Account or create one for free. Download the (Steam Client HERE). Then once you login, click Add a Game (located in the bottom Left corner) -> Activate a Product on Steam. There type in your CD Key and the game will be activated and added to your Steam account game library.
Standard Edition