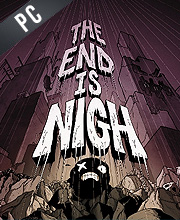 Buy The End is Nigh CD Key Compare Prices

What is The End is Nigh CD key?

It's a digital key that allows you to download The End is Nigh directly to PC from the official Platforms.

How can I find the best prices for The End is Nigh CD keys?

Allkeyshop.com compares the cheapest prices of The End is Nigh on the digital downloads market to find the best sales and discount codes on trusted stores.

The End Is Nigh is an action, adventure video game developed and published by Edmund McMillen and Tyler Glaiel.

This platformer will have you playing as Ash, a thing that was able to survive the end of the world. Set in a post-apocalyptic world where pain and suffering are everywhere. Help Ash go through obstacles as well as mutant like creatures that are already decaying. Your ultimate goal in the game is for Ash to simply make a friend. A morbid friend at that, because it is made out of people parts that he finds in his way.

The End Is Nigh will have you go through more than 12 explorable chapters with 600+ levels. Get to collect the 80+ achievements, because in a world full of pain and suffering, feeling good about yourself is actually nice. Explore all the hidden extras as well as multiple endings available.

There are game cartridges for you to collect that are fully playable mini games. And if that is not your thing, why not try collecting the squishy tumors!

Don’t forget to look after Ash’s stress levels in the game as well.

Will Ash finally find a friend? Play The End Is Nigh and find out.

EPIC GAMES KEY : Region Free / Worldwide. Requires Epic Games Launcher App in order to play the game. You need to create a free account here in order to download The End is Nigh from Epic Plateform . Read the description on the store page about any language or country restrictions.
EUROPEAN STEAM GIFT : It’s a steam gift for Europe which requires an European IP address to activate and to play The End is Nigh on Steam. Read carefully the store description about region and language restrictions.
STEAM CD KEY : Use the Steam Key Code on Steam Platform to download and play The End is Nigh. You must login to your Steam Account or create one for free. Download the (Steam Client HERE). Then once you login, click Add a Game (located in the bottom Left corner) -> Activate a Product on Steam. There type in your CD Key and the game will be activated and added to your Steam account game library.
Standard Edition