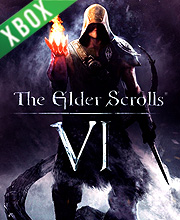 What is The Elder Scrolls 6 Game Code?

It's a digital key that allows you to download The Elder Scrolls 6 directly to Xbox One from Xbox Live.

How can I find the best prices for The Elder Scrolls 6 on Xbox one?

Allkeyshop.com compares the cheapest prices of The Elder Scrolls 6 on the digital downloads market to find the best sales and discount codes on trusted stores.

The Elder Scrolls is a series of action role-playing open-world fantasy games primarily developed by Bethesda Game Studios and published by Bethesda Softworks.

The series is applauded for its enriching experiences and exquisitely detailed world.

The Elder Scroll 6 is the well anticipated latest installment of the series. The developers have leaked very little information about the game and all the magic therein. However, Bethesda’s positive reputation precedes them and fans wait patiently to be wowed once more.

Zoom 1m 3m 1y All
Track product
XBOX ONE GAME CODE : Use the Digital Code received by mail in your Xbox One account to download The Elder Scrolls 6 from the Xbox Live. Internet connection is required. Please read the store description about any language or region restrictions.
Standard Edition
Compare Choose & Buy Download (743)