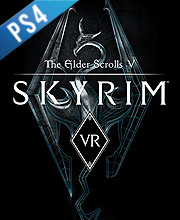 What is The Elder Scrolls 5 Skyrim VR Game Code?

It's a digital key that allows you to download The Elder Scrolls 5 Skyrim VR directly to Playstation 4 from PSN (Playstation network).

Experience the fantastic world of Tamriel in Virtual Reality in The Elder Scrolls 5 Skyrim VR. From award-winning developers comes a full-length open-world game in VR in Skyrim. Reimagine the epic fantasy and exciting journey of Skyrim. Battle ancient dragons, scale huge mountains, discover hidden secrets in the fortress, and explore the open world of Skyrim. The future of the empire is compromised as the dragons have returned and as a Dragonborn, it is in your blood to save the empire from its absolute demise.