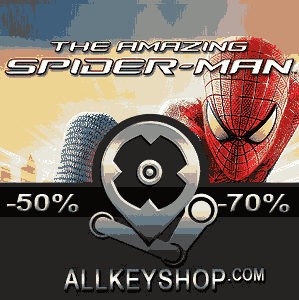 What is The Amazing Spiderman CD key?

It's a digital key that allows you to download The Amazing Spiderman directly to PC from the official Platforms.

How can I find the best prices for The Amazing Spiderman CD keys?

Allkeyshop.com compares the cheapest prices of The Amazing Spiderman on the digital downloads market to find the best sales and discount codes on trusted stores.

The Amazing SpiderMan is an action–adventure video game based on the Marvel Comics character Spider-Man, and the 2012 film with the same title. It was published by Activision and developed by Beenox.

The Amazing Spider-Man is a fun game for every Spiderman-loving gamer out there. Spider-Man triumphantly returns to New York and now everybody’s favorite superhero is back in Manhattan with the return of the fan-favorite, free-roaming, web-slinging gameplay.

This game will get you flying through the streets of Manhattan with cool acrobatics which Spider-Man is mostly known about. Push Spider-Man’s abilities to its limits and battle all-new versions of classic super villains as well as original, larger-than-life enemies while racing to save Manhattan.

Players will use real-time navigational and combat choices to fight crime and pull off Spidey’s signature acrobatic moves like never before. You can also collect full, vintage comic books, such as Amazing Fantasy #15, as you collect comic covers throughout the game. The Amazing Spider-Man is set after the events of Columbia Pictures’ film, and like most movie-based video games follows a linear plot not including some side-quests you can take to unlock achievements.

EU STEAM CD KEY: Requires an EUROPEAN IP address or you must activate it with a VPN (Virtual Private Network) in order to play The Amazing Spiderman. Might have languages restrictions or language packs. Read the description on the store game page to know if the EU IP is only needed for activation or for playing also (maybe on EU Servers). Most of the stores offer you their help, or show you how to do this with a tutorial to follow.
STEAM GIFT : A Steam gift is a one-time transfer you receive. You activate and install The Amazing Spiderman to play on Steam, it is a non-refundable game that stays in your Steam games collection. Please read the store description about any language or region restrictions.
STEAM CD KEY : Use the Steam Key Code on Steam Platform to download and play The Amazing Spiderman. You must login to your Steam Account or create one for free. Download the (Steam Client HERE). Then once you login, click Add a Game (located in the bottom Left corner) -> Activate a Product on Steam. There type in your CD Key and the game will be activated and added to your Steam account game library.
STEAM KEY ROW : It means for Rest Of the World countries which are not concerned by the region restrictions. This product can't be purchased and activated in Several countries. Please read the store description to know the full list of countries which are concerned. Use the key to Download and play The Amazing Spiderman on Steam.
Bundle
Standard Edition
Compare Choose & Buy Download (710)