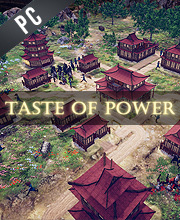 What is Taste of Power CD key?

It's a digital key that allows you to download Taste of Power directly to PC from the official Platforms.

How can I find the best prices for Taste of Power CD keys?

Allkeyshop.com compares the cheapest prices of Taste of Power on the digital downloads market to find the best sales and discount codes on trusted stores.

Taste of Power is a strategy video game that is developed and published by One Ocean LLC.

Offering an RTS game that is set in a world that is an alternative medieval. Players would have to build new settlements as well as well-developed cities, in order to do this, you must also gather resources. You must fight for your settlements and level up by learning new technology.

What makes a Taste of Power stand out is its game mechanics. You will have different types of troops that will have their own peculiarities.

For Europen armies, they have the ability to construct the “Phalanx”, can invoke the Crusaders and can use gunpowder artillery. Their support troops are also able to build fortifications. Monks in your team are able to boost the morale of your troops. And you can send out spies that are able to revolt in enemy cities.

For the Chinese warriors, they are able to use smokescreens. They have Mongolian horsemen and have the earlier version of a rocket artillery. The Chinese support troops are able to set up traps, poisonous grenades plus medical tents.

In order to win you should make quick and calculated decisions. Be flexible enough to rearrange according to the actions of the enemy. Winning, of course, gives you the ultimate Taste of Power.

Zoom 1m 3m 1y All
Track product
STEAM CD KEY : Use the Steam Key Code on Steam Platform to download and play Taste of Power. You must login to your Steam Account or create one for free. Download the (Steam Client HERE). Then once you login, click Add a Game (located in the bottom Left corner) -> Activate a Product on Steam. There type in your CD Key and the game will be activated and added to your Steam account game library.
Early Access
Standard Edition
Compare Choose & Buy Download (772)

Taste of Power is still in early access, but the game has potential to become a solid strategy game, it’s a good start hope they keep polishing it, prices are very cheap from the above deals!