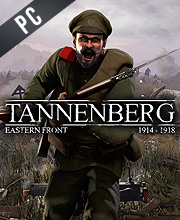 What is Tannenberg CD key?

It's a digital key that allows you to download Tannenberg directly to PC from the official Platforms.

How can I find the best prices for Tannenberg CD keys?

Allkeyshop.com compares the cheapest prices of Tannenberg on the digital downloads market to find the best sales and discount codes on trusted stores.

Tannenberg is a first-person-shooter, action, strategy game developed and published by Blackmill Games & M2H for PC.

This is the most recent entry in the world war one game series that has started with FPS Verdun. The game seeks to replicate as many variables from the historic First World War as possible. This is evident in the weapons, uniforms and maps being synonymous to that of said era.

The game-play covers warfare between the Central Powers and the Russian Empire. Choose a side then apply your knowledge of tactical combat to vanquish enemy forces. Tannenberg shares a brand new experience for novice and seasoned players alike. The game consists of five squads, 25+ weapons, five open maps and a 64 player game mode with full AI bot support enabling you to play at any time. You may enjoy the game in online multiplayer and Online Co-op modes.

Tannenberg was released on November 16, 2017 and is attainable through the Steam Store.

Zoom 1m 3m 1y All
Track product
EPIC GAMES KEY : Region Free / Worldwide. Requires Epic Games Launcher App in order to play the game. You need to create a free account here in order to download Tannenberg from Epic Plateform . Read the description on the store page about any language or country restrictions.
EU STEAM CD KEY: Requires an EUROPEAN IP address or you must activate it with a VPN (Virtual Private Network) in order to play Tannenberg. Might have languages restrictions or language packs. Read the description on the store game page to know if the EU IP is only needed for activation or for playing also (maybe on EU Servers). Most of the stores offer you their help, or show you how to do this with a tutorial to follow.
EUROPEAN STEAM GIFT : It’s a steam gift for Europe which requires an European IP address to activate and to play Tannenberg on Steam. Read carefully the store description about region and language restrictions.
STEAM CD KEY : Use the Steam Key Code on Steam Platform to download and play Tannenberg. You must login to your Steam Account or create one for free. Download the (Steam Client HERE). Then once you login, click Add a Game (located in the bottom Left corner) -> Activate a Product on Steam. There type in your CD Key and the game will be activated and added to your Steam account game library.
Bundle
Bundle 1
Early Access
Standard Edition
Supporter Edition
Compare Choose & Buy Download (743)

One of the best multiplayer shooters out there. Of course it is frustrating at the beginning and that keeps the spoiled kids away. But seriously, it is a simulator and war it’s frustrating. Just imagine real life where you don’t have a health bar and boosts. Anyway, the gameplay, the tactics and the scenes make you feel you are part of a bigger thing, a war battlefield that needs a strategy. Congrats and I want more games like this one, also a Single Player Campaign would be lovely!

i think it will be a good game. the era is good. it was the battle that led to the annihilation of the russian 2nd army. and bolshevk rise to power. great history there.

War game at that price could be good? byw iam not really interrested by an early acces game… HF

Oh, it’s interesting from a setting sandpoint. It’s rare to see a game explore the World War I, let alone the eastern front of it.