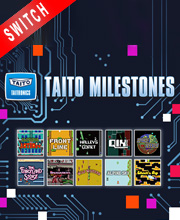 What is TAITO Milestones Game Code?

It's a digital key that allows you to download TAITO Milestones directly to Nintendo Switch directly from Nintendo eShop.

How can I find the best prices for TAITO Milestones on Nintendo Switch ?

Allkeyshop.com compares the cheapest prices of TAITO Milestones on the digital downloads market to find the best sales and discount codes on trusted stores.

TAITO Milestones is a collection of arcade games commemorating the legacy of TATIO’s classic arcade games spanning the entire decade of the ’80s, these ten games paved the way for the company’s dominance of the arcade market, each representing a specific breakthrough in development in gaming history, spanning a variety of genres from Platformers, sports, shooting, puzzles, and many more. Enjoy these 10 games made available for the first time as a collection for modern consoles.

Overall if you were to judge the collection on the games alone, it is a fine package of some well-known Taito games and some lesser-known ones, whether you would call them milestones is up for debate. As a package you will be saving money rather than buying them separately from the E-Shop, however, I still feel that more could have been done by Taito.

Taito Milestones may simply contain 10 classic arcade titles and nothing else but some of these games offer timeless enjoyable challenges that you can spend hours trying to master. I just wish there was some kind of bonus content to scratch more of that retro itch.