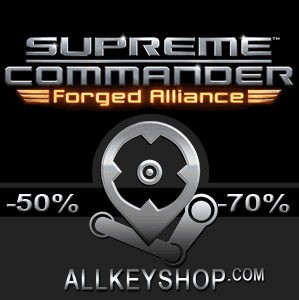 It's a digital key that allows you to download Supreme Commander Forged Alliance directly to PC from the official Platforms.

How can I find the best prices for Supreme Commander Forged Alliance CD keys?

Allkeyshop.com compares the cheapest prices of Supreme Commander Forged Alliance on the digital downloads market to find the best sales and discount codes on trusted stores.

Supreme Commander: Forged Alliance is a standalone real-time strategy video game developed by Gas Powered Games and published by THQ. It is an expansion of the critically acclaimed Supreme Commander franchise.

The game continues to revolve around the epic events happening in the Infinite War, featuring a completely new playable faction- a devious race with advanced technology that will serve as the main threat in the all-new single-player campaign. Bring the battle in new multiplayer battlefields and prove supremacy by utilizing multiple innovative multiplayer features- numerous fully realized navies, orbital weaponry and advanced counter intelligence technologies and many more.

Supreme Commander is a supreme real time strategy game. One of the best RTS games ever created. With this expansion Forged Alliance,the creative minds of Gas Powered Games really did a lot of improvements on the original game. So many units, strategies , tactics, buildings, advanced economy, land,air and naval warfare. One word sums it up, epic!

Zoom 1m 3m 1y All
Track product
EU STEAM CD KEY: Requires an EUROPEAN IP address or you must activate it with a VPN (Virtual Private Network) in order to play Supreme Commander Forged Alliance. Might have languages restrictions or language packs. Read the description on the store game page to know if the EU IP is only needed for activation or for playing also (maybe on EU Servers). Most of the stores offer you their help, or show you how to do this with a tutorial to follow.
STEAM GIFT : A Steam gift is a one-time transfer you receive. You activate and install Supreme Commander Forged Alliance to play on Steam, it is a non-refundable game that stays in your Steam games collection. Please read the store description about any language or region restrictions.
STEAM CD KEY : Use the Steam Key Code on Steam Platform to download and play Supreme Commander Forged Alliance. You must login to your Steam Account or create one for free. Download the (Steam Client HERE). Then once you login, click Add a Game (located in the bottom Left corner) -> Activate a Product on Steam. There type in your CD Key and the game will be activated and added to your Steam account game library.
Collection
Gold Edition
Standard Edition
Compare Choose & Buy Download (743)