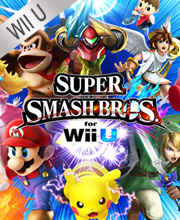 It's a digital key that allows you to download Super Smash Bros directly to Nintendo Wii U from Nintendo eShop.

How can I find the best prices for Super Smash Bros on Wii U ?

Allkeyshop.com compares the cheapest prices of Super Smash Bros on the digital downloads market to find the best sales and discount codes on trusted stores.

Super Smash Bros. is a video game published and developed by Combat Sora Ltd. and Nintendo.

In this fighting game arena, you will have the pleasure to meet virtually all of your Nintendo characters for epic battles and full of twists. Pikachu, Samus, Donkey Kong, Link, Mario and others are in the game.

A total of 41 over 8 unlockable characters will accompany you in your game. You are sure to find the perfect opponent for you!

You will evolve through many worlds and you find the multiplayer mode that allows you to face a lot of different opponents worldwide.

The fights are even more lively and faster than before for an increasingly dynamic and compelling gaming experience.

One of the big novelties concerning the game or multiplayer this time you can play with up to seven other fighters for parties of eight this offers rare intensity!

Featuring graphics to the Nintendo are still as beautiful and captivating and a soundtrack including memorable music, you’ll soon be addicted to your new fighting game!

A classical of Nintendo games. Spent many hours on this Wii U version

One of my favorite games was Xenoblade Chronicles, and I love that they put Shulk in this game. Maybe the second best game in the series behind Melee.

the best kombat game on nintendo