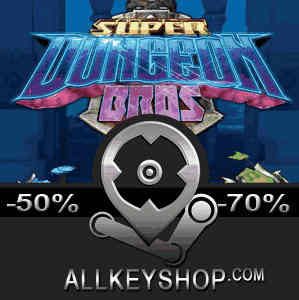 It's a digital key that allows you to download Super Dungeon Bros directly to PC from the official Platforms.

How can I find the best prices for Super Dungeon Bros CD keys?

Allkeyshop.com compares the cheapest prices of Super Dungeon Bros on the digital downloads market to find the best sales and discount codes on trusted stores.

A rock-themed dungeon brawler that will have you playing as one of the legends: Axl, Lars, Freddie, and Ozzie. Play as a single player or with friends via co-op, discover the multiple worlds of Rökheim.

Each dungeon you enter will be different from the previous because of the random room generation AI. The game is set with a roguelike platforming that will let you use the traps set against your enemies. Make sure to finish as many side missions as you can to increase your loot as well as weaponry.

Make sure to choose the right weapon for the job. There will be 4 weapon classes to choose from that include wands, hammers, crossbows, and swords. You will definitely enjoy the games rocking soundtrack while wiping out epic bosses and villainous enemies.

Get to play Super Dungeon Bros with friends that can accommodate offline co-op multiplayer with cross-platform play. This can be done between PlayStation 4 and PC or Mac and Xbox One and Windows 10.

Have your game on with Super Dungeon Bros and rock on!

STEAM GIFT : A Steam gift is a one-time transfer you receive. You activate and install Super Dungeon Bros to play on Steam, it is a non-refundable game that stays in your Steam games collection. Please read the store description about any language or region restrictions.
STEAM CD KEY : Use the Steam Key Code on Steam Platform to download and play Super Dungeon Bros. You must login to your Steam Account or create one for free. Download the (Steam Client HERE). Then once you login, click Add a Game (located in the bottom Left corner) -> Activate a Product on Steam. There type in your CD Key and the game will be activated and added to your Steam account game library.
STEAM KEY ROW : It means for Rest Of the World countries which are not concerned by the region restrictions. This product can't be purchased and activated in Several countries. Please read the store description to know the full list of countries which are concerned. Use the key to Download and play Super Dungeon Bros on Steam.
Windows 10 Global : This is an Worldwide Microsoft code to play on PC for Worldwide . You need to have installed Windows 10 Anniversary Edition update on your PC. Log into your Microsoft account to download and play. Read closely the description given by the store to activate your game.
Standard Edition