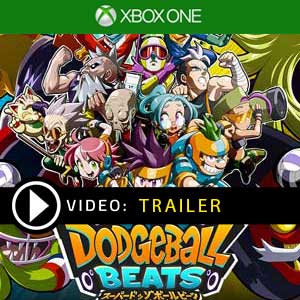 It's a digital key that allows you to download Super Dodgeball Beats directly to Xbox One from Xbox Live.

How can I find the best prices for Super Dodgeball Beats on Xbox one?

Allkeyshop.com compares the cheapest prices of Super Dodgeball Beats on the digital downloads market to find the best sales and discount codes on trusted stores.

Zoom 1m 3m 1y All
Track product
XBOX ONE GAME CODE : Use the Digital Code received by mail in your Xbox One account to download Super Dodgeball Beats from the Xbox Live. Internet connection is required. Please read the store description about any language or region restrictions.
Standard Edition
Compare Choose & Buy Download (803)

For a rhythmic game, it has good production value when it comes to music, animation, and gameplay. Many similar titles have poor hit-boxes that make it hard to time your beats, but it’s not a huge problem with this one. I played through the tutorial in 2 minutes, and I didn’t have any issues understanding the basics. Your dodgeball team has 4 players which line up with 4 buttons on a controller, making it easy to orient yourself. Surprisingly, it has 3 different types of rhythmic mechanics. Aside from pressing the buttons at the right time, you will also have to deal with ‘hold-release’ actions, and moving analog (probably better with a controller). Each team also gets different specials attacks which can be changed with unlockable mascots. The single-player component works like a tournament with 2 stages, a point-based elimination round, and top 8 playoffs. After you beat the game, you can replay it on a higher difficulty. It has a nice visual variety between all of the hostile teams, so it’s nice to replay it once or twice just to see the animation. Unfortunately, there is almost no progression aside from changing mascots.