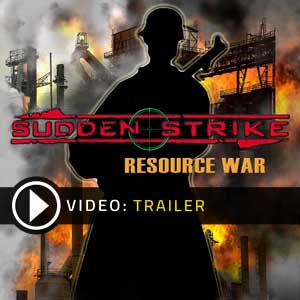 It's a digital key that allows you to download Sudden Strike Resource War directly to PC from the official Platforms.

How can I find the best prices for Sudden Strike Resource War CD keys?

Allkeyshop.com compares the cheapest prices of Sudden Strike Resource War on the digital downloads market to find the best sales and discount codes on trusted stores.

Sudden Strike: Resource War is a real-time tactics (RTT), strategy computer game developed by Fireglow. It is set in World War II and the second game in the Sudden Strike series.

The whole world is nothing but a battlefield. Command your German, British and American troops while fighting battles on water, land and even in the air. Consists of four different available difficulty levels and a challenging multiplayer mode that’s action filled and has good reinforcement and fuel system to deliver an amazingly realistic war experience. Play all four new campaigns with sixteen missions, explore the ten new multiplayer maps with up to four players, scavenge for resources, capture buildings to gain reinforcements, fight side by side with allies and a whole lot more!

Starting from the real-time strategy blockbuster of the millennium – Sudden Strike 1, this game offers epic battles with full realism. With Sudden Strike: Resource War, the war is far from over!

PUBLISHER WEBSITE CD KEY: Use the CD Key Code to download directly on the Official Website or from the store to play Sudden Strike Resource War. Follow the instructions given by the store. Verify languages available and possible region restrictions before buying.
STEAM GIFT ROW : This a steam gift for ROW regions. It means for Rest Of the World. This product can't be purchased and activated in Several countries. Please read the store description to know the full list of countries which are concerned.
STEAM CD KEY : Use the Steam Key Code on Steam Platform to download and play Sudden Strike Resource War. You must login to your Steam Account or create one for free. Download the (Steam Client HERE). Then once you login, click Add a Game (located in the bottom Left corner) -> Activate a Product on Steam. There type in your CD Key and the game will be activated and added to your Steam account game library.
Bundle
Gold Edition
Standard Edition