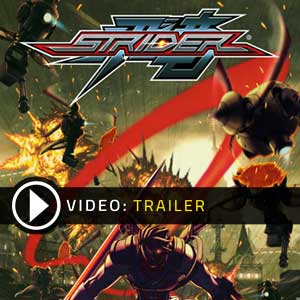 What is Strider CD key?

It's a digital key that allows you to download Strider directly to PC from the official Platforms.

How can I find the best prices for Strider CD keys?

Allkeyshop.com compares the cheapest prices of Strider on the digital downloads market to find the best sales and discount codes on trusted stores.

The Strider organization sends their best assassin, Strider Hiryu, to kill the villain, Grandmaster Meio, in the metropolis of Kazakh City.

The game is a retelling of the “core Strider story” and its common theme which centers around Hiryu’s battle against Grandmaster Meio. The game mixes together elements from the first arcade Strider game, the NES console game, Strider 2, his fighting game appearances, and the original manga.

The player control the series’ main character, Strider Hiryu. The environment is freely explorable in search for weapons and items. Strider Hiryu’s main weapon is his Cypher, a plasma weapon that can take several properties. Upgrades for the Cypher can be obtained by exploring Kazakh.

The game’s soundtrack features multiple homages to classic Strider themes but with several modifications. The sound quality is also meant to resemble the music from the original games.

EU STEAM CD KEY: Requires an EUROPEAN IP address or you must activate it with a VPN (Virtual Private Network) in order to play Strider. Might have languages restrictions or language packs. Read the description on the store game page to know if the EU IP is only needed for activation or for playing also (maybe on EU Servers). Most of the stores offer you their help, or show you how to do this with a tutorial to follow.
EUROPEAN STEAM GIFT : It’s a steam gift for Europe which requires an European IP address to activate and to play Strider on Steam. Read carefully the store description about region and language restrictions.
STEAM CD KEY : Use the Steam Key Code on Steam Platform to download and play Strider. You must login to your Steam Account or create one for free. Download the (Steam Client HERE). Then once you login, click Add a Game (located in the bottom Left corner) -> Activate a Product on Steam. There type in your CD Key and the game will be activated and added to your Steam account game library.
STEAM KEY ROW : It means for Rest Of the World countries which are not concerned by the region restrictions. This product can't be purchased and activated in Several countries. Please read the store description to know the full list of countries which are concerned. Use the key to Download and play Strider on Steam.
Standard Edition