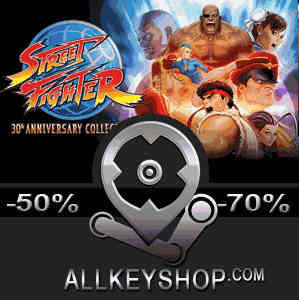 It's a digital key that allows you to download Street Fighter 30th Anniversary Collection directly to PC from the official Platforms.

How can I find the best prices for Street Fighter 30th Anniversary Collection CD keys?

Street Fighter 30th Anniversary Collection is an action video game. The developer is Digital Eclipse and it was published by Capcom U.S.A. Inc.

A Museum will also be available which would include the evolution of Street Fighter throughout its 30 years of existence. Get to know more about the cast, watch the behind the scenes as well as the character viewer.

Choose your favorite Street Fighter character and get to play in all the games available in the collection!

Pre-order: Receive a free digital copy of Ultra Street Fighter IV when SF30AC launches on May 29, 2018. (Can be different or change over time for each seller. Please refer to the seller’s website)

Can’t believe it’s been so long since the first Street FIghter came out. Cool to have all the different versions available.

Be careful if purchasing outside EU. A lot of these keys are EU only

Nope, i dont want this game… I prefer others. have fun fans guys.
I like animation btw

Very interesting and funny collection of a very famous brand.A must buy for all brawlers fans. At a great price on allkeyshop.