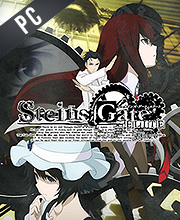 You can participate to these tests by adding comments about your digital download purchase in the store review page. Enjoy the best deals for STEINSGATE ELITE CD Key with Allkeyshop.com!

A fully animated visual novel that follows the story of some tech-savvy students who were able to discover that they have the ability to change the past by using an e-mail and a modified microwave. As they push the boundaries of their experiments, time begins to spiral out of control and they then become involved in the conspiracy that surrounds SERN – an organization that claims to be from a dystopian future.

This is the updated version of the 2009’s Steins Gate and unlike the previous game, this is fully animated. It of course still has the beautiful animation of the Steins Gate anime but now with the newly created sequences that would lead to different endings. New story routes have been added which are not adopted in the anime.

To progress in the game’s story players must read the on-screen text then press a button to advance both the text and animation. Choices will be offered at some points that can cause the story to branch out and have different endings.

STEAM CD KEY : Use the Steam Key Code on Steam Platform to download and play STEINSGATE ELITE. You must login to your Steam Account or create one for free. Download the (Steam Client HERE). Then once you login, click Add a Game (located in the bottom Left corner) -> Activate a Product on Steam. There type in your CD Key and the game will be activated and added to your Steam account game library.
Standard Edition. Read the store description to know the content.

Be the first one to write a review about STEINSGATE ELITE !