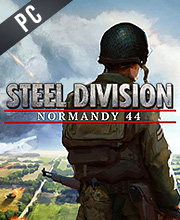 It's a digital key that allows you to download Steel Division Normandy 44 directly to PC from the official Platforms.

How can I find the best prices for Steel Division Normandy 44 CD keys?

Allkeyshop.com compares the cheapest prices of Steel Division Normandy 44 on the digital downloads market to find the best sales and discount codes on trusted stores.

Steel Division: Normandy 44 is an action, real-time strategy video game that is developed by Eugen Systems and published by Paradox Interactive.

Set during World War II, specifically, the invasion of Normandy in the year of 1944. You will get to play as any of the legendary military divisions from the six different countries (e.g. 3rd Canadian Division, German armored 21st Panzer, American 101st Airborne, etc.).

Over 400 tanks, troops, and vehicles presented in the game are all historically accurate. Same with the maps which were based on the actual aerial reconnaissance photos taken in 1944 of Normandy. The game offers a real world setting requiring players to have real-world tactics and strategies.

Offering either a single player, multiplayer, 10 vs 10 head-to-head experience. Make sure to think deeply about your battle group customization, and troop maneuvering and positioning to secure your wins!

The game’s newest Eugen’s IRISZOOM engine will make all your zoom in’s smooth from an aerial view up to a single unit on the map.

Take your tactical and strategic thinking to the limits with Steel Division: Normandy 44.

Zoom 1m 3m 1y All
Track product
EU STEAM CD KEY: Requires an EUROPEAN IP address or you must activate it with a VPN (Virtual Private Network) in order to play Steel Division Normandy 44. Might have languages restrictions or language packs. Read the description on the store game page to know if the EU IP is only needed for activation or for playing also (maybe on EU Servers). Most of the stores offer you their help, or show you how to do this with a tutorial to follow.
STEAM CD KEY : Use the Steam Key Code on Steam Platform to download and play Steel Division Normandy 44. You must login to your Steam Account or create one for free. Download the (Steam Client HERE). Then once you login, click Add a Game (located in the bottom Left corner) -> Activate a Product on Steam. There type in your CD Key and the game will be activated and added to your Steam account game library.
STEAM KEY ROW : It means for Rest Of the World countries which are not concerned by the region restrictions. This product can't be purchased and activated in Several countries. Please read the store description to know the full list of countries which are concerned. Use the key to Download and play Steel Division Normandy 44 on Steam.
Bundle
Deluxe Edition
Franchise Pack
Standard Edition
Compare Choose & Buy Download (759)

Good STR game and awesome multiplayer mod. I recommand it.

I am interested,but I will wait for the price to drop.

the best place for buying this game is in this website

As of May 23, you may consider buying Steel Division from HRK, instant gaming and CDKeys

Steel Division: Normandy 44 is a Tactical Real-Time Strategy (RTS) game, developed by Eugen Systems, the creators of titles like Wargame and R.U.S.E. This new game puts players in command of detailed, historically accurate tanks, troops, and vehicles at the height of World War II.