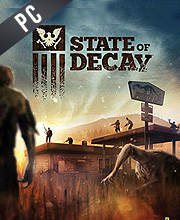 What is State of Decay CD key?

It's a digital key that allows you to download State of Decay directly to PC from the official Platforms.

How can I find the best prices for State of Decay CD keys?

Allkeyshop.com compares the cheapest prices of State of Decay on the digital downloads market to find the best sales and discount codes on trusted stores.

State of Decay is a third person zombie-survival horror action RPG developed by Undead Labs and published by Microsoft Studios.

The world will never be the same as the zombie apocalypse has begun. State of Decay highlights the player’s survival tactics: stealth, escaping from hordes of zombies, distractions, community leadership, finding resources, and venturing through the world with actual deadly encounters with those scary zombies. Your role is to lead and rebuild a community among the survivors in this dynamic yet vulnerable open world.

State of Decay is nearly idealistic for its genre if you want to play a zombie game. Heads explode, bodies flail, you get overwhelmed and then die afterwards. Once your character dies, its permanent, but it’ll just switch you to the next character in your group.

Form a base, scavenge for supplies food and ammunition, rescue other playable characters along the way (each with unique capabilities), fight the undead and most importantly, survive! But always keep in mind that zombies are deadly and the good guys don’t always win. Brains, anyone?

STEAM CD KEY : Use the Steam Key Code on Steam Platform to download and play State of Decay. You must login to your Steam Account or create one for free. Download the (Steam Client HERE). Then once you login, click Add a Game (located in the bottom Left corner) -> Activate a Product on Steam. There type in your CD Key and the game will be activated and added to your Steam account game library.
Standard Edition