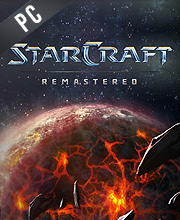 What is StarCraft Remastered CD key?

It's a digital key that allows you to download StarCraft Remastered directly to PC from the official Platforms.

How can I find the best prices for StarCraft Remastered CD keys?

Allkeyshop.com compares the cheapest prices of StarCraft Remastered on the digital downloads market to find the best sales and discount codes on trusted stores.

StarCraft Remastered is a 2017 remastered version of the game StarCraft and the expansion Brood War that came out in 1998.

Starcraft retains its seat in the high pantheon of genre defining games. CGMagazine

It has the perfect blend of balanced gameplay, multiplayer options, incredible story, and nostalgia all rolled into one, and any StarCraft gamer should be drooling at the chance to return to the Koprulu Sector.

StarCraft is one of the best competitive strategy game ever , is fun and have good story!