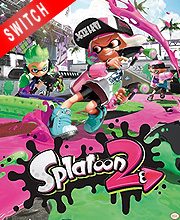 What is Splatoon 2 Game Code?

It's a digital key that allows you to download Splatoon 2 directly to Nintendo Switch directly from Nintendo eShop.

How can I find the best prices for Splatoon 2 on Nintendo Switch ?

Allkeyshop.com compares the cheapest prices of Splatoon 2 on the digital downloads market to find the best sales and discount codes on trusted stores.

Splatoon 2 is an action, multiplayer video game that is published and developed by Nintendo for the Nintendo Switch.

Welcome back to Inkopolis! It has been two years since the story of the first Splatoon. And the Squid Kids called Inklings are here once again. It has been months since the last Splatfest and the Squid Sisters are now going in their own separate ways with their solo carriers. Everything changes when one of the Squid Sisters, Marie finds out that her sister Callie is missing and that the Great Zapfish has once again been stolen. Marie then recruits another Inkling to be her partner then looks for the missing Great Zapfish and find out what happened to her sister.

Get to enjoy the various modes like the Turf War which is a 4 vs 4 multiplayer battle, the Salmon Run where 2 to 4 players can team up to kill all the Salmonids that they can and the Hero Run which is the single-player mode of the game.

A colorful and fun game awaits in Splatoon 2!

It is a nice game. Gamers should buy this one for sure, today!

i want this one, i enjoy too much splatoon 1 on the wiiu, 100+ hours, good memories.

i want this one, i enjoy too much splatoon 1 on the wiiu, 200+ hours, good memories.

i want this one, i enjoy too much splatoon 1 on the wiiu, 200+ hours, good memories.