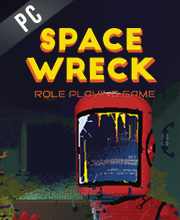 What is Space Wreck CD key?

It's a digital key that allows you to download Space Wreck directly to PC from the official Platforms.

How can I find the best prices for Space Wreck CD keys?

Allkeyshop.com compares the cheapest prices of Space Wreck on the digital downloads market to find the best sales and discount codes on trusted stores.

Space Wreck is a fallout-inspired post-apocalyptic role-playing game set in space with an extreme focus on the role-playing aspect, with an intentionally short yet deep branching narrative adventure with multiple playing styles. You can play whatever character you wish a smooth talker, sneaky hacker, brawling bully, or something else fighting is 100% optional and entirely it’s your choice. Just like in fallout you will be able to distribute points to increase or limit your abilities like CHARM which governs speech, PHYSICAL which governs your physical abilities, and Computer skills on how good you are at using terminals. Your chosen stats will significantly affect your gameplay style.

Zoom 1m 3m 1y All
Track product
STEAM CD KEY : Use the Steam Key Code on Steam Platform to download and play Space Wreck. You must login to your Steam Account or create one for free. Download the (Steam Client HERE). Then once you login, click Add a Game (located in the bottom Left corner) -> Activate a Product on Steam. There type in your CD Key and the game will be activated and added to your Steam account game library.
Early Access
Compare Choose & Buy Download (803)