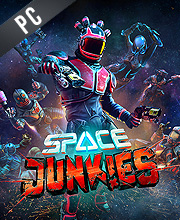 It's a digital key that allows you to download Space Junkies VR directly to PC from the official Platforms.

How can I find the best prices for Space Junkies VR CD keys?

Allkeyshop.com compares the cheapest prices of Space Junkies VR on the digital downloads market to find the best sales and discount codes on trusted stores.

Space Junkies is an action sports video game that is developed by Ubisoft Montpellier and published by Ubisoft. This is a virtual reality game that requires a VR headset.

Get to fly through the lethal Orbital Arenas in this jetpack-fueled VR arcade-shooter. Extreme battles await especially in the Dirty Bowl where death will strike you when you least expect it and it could come from any direction.

Play in the game’s multiplayer where elite tribes go and battle it out in either 2v2 or 1v1 matches. And of course, what is a battle without weapons? Choose from Bioguns to Sandblasters. You can use this by combining it with other weapons and by using it in different angles or one or both of your hands.

Everything is built in VR, you can fly through, dodge and just be completely amazed at the 360 degrees orbital battlefields.

You must always be on your toes as enemies can come at you so fast and in any direction, sometimes you wouldn’t know what hit you.

Craving for some VR action? Space Junkies is the game for you.

Zoom 1m 3m 1y All
Track product
STEAM GIFT : A Steam gift is a one-time transfer you receive. You activate and install Space Junkies VR to play on Steam, it is a non-refundable game that stays in your Steam games collection. Please read the store description about any language or region restrictions.
STEAM CD KEY : Use the Steam Key Code on Steam Platform to download and play Space Junkies VR. You must login to your Steam Account or create one for free. Download the (Steam Client HERE). Then once you login, click Add a Game (located in the bottom Left corner) -> Activate a Product on Steam. There type in your CD Key and the game will be activated and added to your Steam account game library.
Standard Edition
Compare Choose & Buy Download (803)

Space Junkies is good game, you can buy it now with best price.

I can’t even… VR shooter that looks ridiculous? why not I guess – needs to be much lower in price though – should fall a lot once it’s released I’m sure.

Space Junkies looks like a cool Multi-player VR shooter from Ubisoft, Many good deals and the prices are all close, give it a try if you are looking for a new experience!

I don’t know this game and I will descover it. The graphic design seems nice.

actually this looks pretty cool I get an Enders game vibe from it!