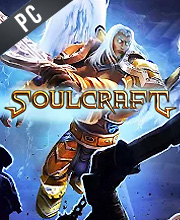 What is Soulcraft CD key?

It's a digital key that allows you to download Soulcraft directly to PC from the official Platforms.

How can I find the best prices for Soulcraft CD keys?

Allkeyshop.com compares the cheapest prices of Soulcraft on the digital downloads market to find the best sales and discount codes on trusted stores.

SoulCraft is an indie action RPG developed by MobileBits and published by Headup Games.

The game revolves around the story of humans, angels, and demons during a time when mankind is about to discover the secret to immortality. It is also during that time that angels and demons create a pact to proclaim the apocalypse so that they can materialize on Earth and fight humans. In Soulcraft, you will play as an angel, and you will be the one to decide who wins the war.

Soulcraft is a simple action-RPG which features tons of hack n slash and lots of dungeon crawling. As an angel you get to fight off demons in real-life locations such as Rome, Hamburg, Egypt, and more.

With different game modes, you will also be able to take on legendary quests as well as challenge boss fights. You will face various enemies in the game, so you better prepare yourself with weapons, items, spells, gear, and equipment to emerge victorious.

Heaven awaits its knight. Take on the challenge on Soulcraft today.

STEAM GIFT : A Steam gift is a one-time transfer you receive. You activate and install Soulcraft to play on Steam, it is a non-refundable game that stays in your Steam games collection. Please read the store description about any language or region restrictions.
STEAM CD KEY : Use the Steam Key Code on Steam Platform to download and play Soulcraft. You must login to your Steam Account or create one for free. Download the (Steam Client HERE). Then once you login, click Add a Game (located in the bottom Left corner) -> Activate a Product on Steam. There type in your CD Key and the game will be activated and added to your Steam account game library.
Complete Pack
Standard Edition