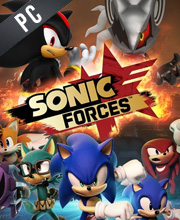 What is Sonic Forces CD key?

It's a digital key that allows you to download Sonic Forces directly to PC from the official Platforms.

How can I find the best prices for Sonic Forces CD keys?

Allkeyshop.com compares the cheapest prices of Sonic Forces on the digital downloads market to find the best sales and discount codes on trusted stores.

Sonic Forces is an action–adventure video game developed by Sonic Team and Hardlight and published by SEGA.

Dr. Eggman has conquered almost half of the world with the help of a mysterious powerful being called Infinite. He also has under his command Shadow of the Hedgehog, Metal Sonic, Chaos, and Zavok. A resistance has been formed against them with Sonic the Hedgehog leading the pack. He is also joined by his friends as well as a past self from another dimension.

Get to play as either a Modern Sonic or a Classic Sonic in Sonic Forces. A Modern Sonic will let you play in three-dimensional stages and a Classic Sonic, on the other hand, offers a 2D side-scrolling gameplay. One additional character is made available called the Avatar which is a customizable player. This is actually a first for the series. Tag teams are also made available between Sonic and the Avatar then you can use some combination techniques.

Get to enjoy unlimited lives and run at high-speeds across levels. Dodge the hazards brought about by Dr. Eggman and collect all the gold rings scattered about.

Pre-Order: Sonic Forces + Shadow Costume (Can be different or change over time for each seller. Please refer to the seller’s website)

EU STEAM CD KEY: Requires an EUROPEAN IP address or you must activate it with a VPN (Virtual Private Network) in order to play Sonic Forces. Might have languages restrictions or language packs. Read the description on the store game page to know if the EU IP is only needed for activation or for playing also (maybe on EU Servers). Most of the stores offer you their help, or show you how to do this with a tutorial to follow.
EUROPEAN STEAM GIFT : It’s a steam gift for Europe which requires an European IP address to activate and to play Sonic Forces on Steam. Read carefully the store description about region and language restrictions.
STEAM CD KEY : Use the Steam Key Code on Steam Platform to download and play Sonic Forces. You must login to your Steam Account or create one for free. Download the (Steam Client HERE). Then once you login, click Add a Game (located in the bottom Left corner) -> Activate a Product on Steam. There type in your CD Key and the game will be activated and added to your Steam account game library.
STEAM KEY ROW : It means for Rest Of the World countries which are not concerned by the region restrictions. This product can't be purchased and activated in Several countries. Please read the store description to know the full list of countries which are concerned. Use the key to Download and play Sonic Forces on Steam.
Bonus Edition
Standard Edition
Ultimate Bundle

I heard this sonic has quite a few bugs but we will see.

I once came across a very… interesting original character a fan created called Luke the Hedgehog. Now he can create it in Sonic Forces!