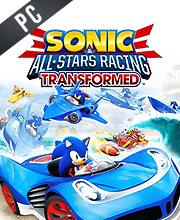 What is Sonic All Stars Racing Transformed CD key?

It's a digital key that allows you to download Sonic All Stars Racing Transformed directly to PC from the official Platforms.

How can I find the best prices for Sonic All Stars Racing Transformed CD keys?

Allkeyshop.com compares the cheapest prices of Sonic All Stars Racing Transformed on the digital downloads market to find the best sales and discount codes on trusted stores.

Sonic & All-Stars Racing Transformed is a kart racing video game available in single-player and multiplayer mode. It was developed by Sumo Digital and published by Sega.

Sonic & All-Stars Racing Transformed is a racing game where players race each other to the finish line using different characters from Sega franchises. The game features new mechanics and improvements from the previous game sequel. One of the improved features of the game is that, at a certain point in the race, the players can alternate boat, car and plane modes.

The car mode can earn boost by drifting in the corners and by performing stunts while in the air. The boat mode features boating physics which require the players to consider their vehicles turbulence considering the waves in the water. Plane mode is the fastest among the three modes. It gives player the option to move vertically and horizontally. The players can change modes by driving through the blue transformation gates.

Weapons such as freezing snowballs, swarms of wasps, hot rod engines and blowfish are available for use to defeat your competitors. Star tokens are also to be collected which are scattered around the course or by attacking your opponents. These tokens can be spent in the slot machine between events to earn bonuses.

EU STEAM CD KEY: Requires an EUROPEAN IP address or you must activate it with a VPN (Virtual Private Network) in order to play Sonic All Stars Racing Transformed. Might have languages restrictions or language packs. Read the description on the store game page to know if the EU IP is only needed for activation or for playing also (maybe on EU Servers). Most of the stores offer you their help, or show you how to do this with a tutorial to follow.
STEAM GIFT : A Steam gift is a one-time transfer you receive. You activate and install Sonic All Stars Racing Transformed to play on Steam, it is a non-refundable game that stays in your Steam games collection. Please read the store description about any language or region restrictions.
STEAM CD KEY : Use the Steam Key Code on Steam Platform to download and play Sonic All Stars Racing Transformed. You must login to your Steam Account or create one for free. Download the (Steam Client HERE). Then once you login, click Add a Game (located in the bottom Left corner) -> Activate a Product on Steam. There type in your CD Key and the game will be activated and added to your Steam account game library.
STEAM KEY ROW : It means for Rest Of the World countries which are not concerned by the region restrictions. This product can't be purchased and activated in Several countries. Please read the store description to know the full list of countries which are concerned. Use the key to Download and play Sonic All Stars Racing Transformed on Steam.
Collection
Pack X4
Standard Edition
Compare Choose & Buy Download (723)

I have to say that (after the legendary Mario Kart series) this is the most fun racing game inspired on the classic video game characters. Sonic’s been always fun to play even without something like this, but when you see Pyro, Heavy and Spy from TF2 racing in a game like this, it’s definitely a must-try. I’d recommend this to everyone who loves any kind of racing games.