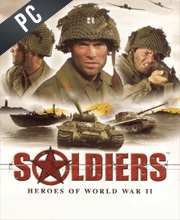 What is Soldiers Heroes of World War 2 CD key?

It's a digital key that allows you to download Soldiers Heroes of World War 2 directly to PC from the official Platforms.

How can I find the best prices for Soldiers Heroes of World War 2 CD keys?

Allkeyshop.com compares the cheapest prices of Soldiers Heroes of World War 2 on the digital downloads market to find the best sales and discount codes on trusted stores.

Soldiers: Heroes of World War II is one of the best real-time strategy WWII games. The graphics are gorgeous and the game engine has some excellent physics. With the excellent sound effects and music, is game will draw you into its world and is quite a delight for those who likes a solid RTS game.

It’s complexity will turn many gamers far, far away, but to those with the dedication to play a solid and challenging game that will last them many hours, this game is for you. This game is set in World War II when conflict surfaced between great countries. Soldiers: Heroes of World War II is not your typical build your town and defeat you opponents

The thing that lets this game stand out is its difficulty. It’s challenging but once you get hooked in the game, every victory is satisfying. Definitely a great buy!. This game tests a player’s ability to plan and execute a strategy to win a battle. Players are given a certain amount of troops where he can choose between American, British, Soviet, or German forces to play.

Zoom 1m 3m 1y All
Track product
PUBLISHER WEBSITE CD KEY: Use the CD Key Code to download directly on the Official Website or from the store to play Soldiers Heroes of World War 2. Follow the instructions given by the store. Verify languages available and possible region restrictions before buying.
STEAM CD KEY : Use the Steam Key Code on Steam Platform to download and play Soldiers Heroes of World War 2. You must login to your Steam Account or create one for free. Download the (Steam Client HERE). Then once you login, click Add a Game (located in the bottom Left corner) -> Activate a Product on Steam. There type in your CD Key and the game will be activated and added to your Steam account game library.
Standard Edition
Compare Choose & Buy Download (772)