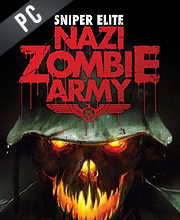 It's a digital key that allows you to download Sniper Elite Nazi Zombie Army directly to PC from the official Platforms.

How can I find the best prices for Sniper Elite Nazi Zombie Army CD keys?

Sniper Elite Nazi Zombie Army is an action tactical shooter game developed and published by Rebellion. It is a stand-alone title in the Sniper Elite series following the release of Sniper Elite V2.

The game is set in Berlin during the final days of World War II as Hitler unleashes a legion of zombie super soldiers that are bound to threaten Europe in its entirety. You will play the game as Karl Fairburne, a sniper who’s one of the last living survivors in Germany. Along with three other players, create a team of Sniper Elite and work together to completely eradicate the zombie threat!

Nazi Zombie Army features the franchise’s signature X-ray kill cam which shows you how you were able to make the kill. Of course being a sniper is no easy job so the game leans on making it as realistic as possible by taking into account several factors such as wind, velocity, stability, and gravity. Manage your team and work together with a German officer, a scientist, and a Russian soldier as you plan your positions, set traps, and kill zombies as one team.

STEAM CD KEY : Use the Steam Key Code on Steam Platform to download and play Sniper Elite Nazi Zombie Army. You must login to your Steam Account or create one for free. Download the (Steam Client HERE). Then once you login, click Add a Game (located in the bottom Left corner) -> Activate a Product on Steam. There type in your CD Key and the game will be activated and added to your Steam account game library.
STEAM GIFT : A Steam gift is a one-time transfer you receive. You activate and install Sniper Elite Nazi Zombie Army to play on Steam, it is a non-refundable game that stays in your Steam games collection. Please read the store description about any language or region restrictions.
Standard Edition

Be the first one to write a review about Sniper Elite Nazi Zombie Army !