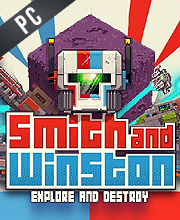 What is Smith and Winston CD key?

It's a digital key that allows you to download Smith and Winston directly to PC from the official Platforms.

How can I find the best prices for Smith and Winston CD keys?

Allkeyshop.com compares the cheapest prices of Smith and Winston on the digital downloads market to find the best sales and discount codes on trusted stores.

Smith and Winston is an action, indie video game that is developed and published by Execution Unit Ltd.

Guide the two ill-fated adventurers named Smith and Winston as they go on an adventure by exploring as well as destroying the ring world. Get to fight aliens as well as save the universe by uncovering the truth about the VOID and stop the imminent doom.

Destruction in the game is limitless, so you can destroy everything that you like and more.

Offering a handcrafted game where each level had been designed by a human hand. With the unique world comes a lot of puzzling levels where you must rely on your cunning and wit to look for the very important collectibles distributed around the game. The collectibles are hidden where you least expect it, some underground, some behind locked doors and so much more.

Get to enjoy the game’s well-balanced combat. Take cover in temporary barriers, look for escape routes and watch out for the enemy drops. Do take care when you play through as one-shot deaths are a thing and there are only limited lives available.

Gather all 30 collectibles and destroy everything in sight with Smith and Winston.

Zoom 1m 3m 1y All
Track product
STEAM CD KEY : Use the Steam Key Code on Steam Platform to download and play Smith and Winston. You must login to your Steam Account or create one for free. Download the (Steam Client HERE). Then once you login, click Add a Game (located in the bottom Left corner) -> Activate a Product on Steam. There type in your CD Key and the game will be activated and added to your Steam account game library.
Early Access
Standard Edition
Compare Choose & Buy Download (772)

If you want to save a few bucks on these “review keys” go for it. We’re working hard to finish the game ASAP.

Smith and Winston is still in Early Access, nevertheless the game is generating few but positive reviews, prices are really cheap, will give this a try for sure.