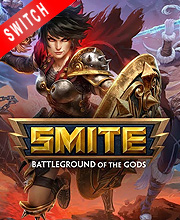 What is SMITE Game Code?

It's a digital key that allows you to download SMITE directly to Nintendo Switch directly from Nintendo eShop.

How can I find the best prices for SMITE on Nintendo Switch ?

Allkeyshop.com compares the cheapest prices of SMITE on the digital downloads market to find the best sales and discount codes on trusted stores.

SMITE is an action, third-person, online multiplayer game developed by Titan Forge Games and Developed by Hi-Rez Studios and is available for the Nintendo Switch.

Choose your favorite god, goddess or other mythological figure and indulge in team based combat.

Players must use abilities and sound tactics to outwit and dominate other gods, piloted by enemy players.

The game has multiple game modes which require various forms of game-play, tactics and gods.

Prove you have what it takes to triumph in the battleground of the gods.