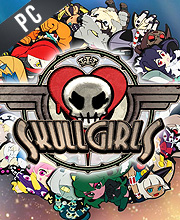 What is Skullgirls CD key?

It's a digital key that allows you to download Skullgirls directly to PC from the official Platforms.

How can I find the best prices for Skullgirls CD keys?

Allkeyshop.com compares the cheapest prices of Skullgirls on the digital downloads market to find the best sales and discount codes on trusted stores.

Skullgirls is a 2D action/fighting game developed by Lab Zero Games and published by MarvelousAQL. The game is a modern take on classic arcade fighting games but with enhancements in terms of its graphics, animations, and lighting.

As an arcade-style fighting game, Skullgirls employs the classic six-button play which gives characters a wide variety of attacks and special moves. You can also match and mismatch your team of fighters through the Variable Tag Battle System which allows you to pit one, tow, or three characters against one another. Outfit your team with a huge variety of attacks with endless possibilities with the game’s Custom Assist.

Other game features include an AI tutorial for players who are new to the game, and a stunning soundtrack courtesy of Michiru Yamane.

If you’re looking for an action arcade game that suits your modern tastes, then Skullgirls is one that should definitely make it on top of your list.

Zoom 1m 3m 1y All
Track product
EU STEAM CD KEY: Requires an EUROPEAN IP address or you must activate it with a VPN (Virtual Private Network) in order to play Skullgirls. Might have languages restrictions or language packs. Read the description on the store game page to know if the EU IP is only needed for activation or for playing also (maybe on EU Servers). Most of the stores offer you their help, or show you how to do this with a tutorial to follow.
STEAM GIFT : A Steam gift is a one-time transfer you receive. You activate and install Skullgirls to play on Steam, it is a non-refundable game that stays in your Steam games collection. Please read the store description about any language or region restrictions.
STEAM CD KEY : Use the Steam Key Code on Steam Platform to download and play Skullgirls. You must login to your Steam Account or create one for free. Download the (Steam Client HERE). Then once you login, click Add a Game (located in the bottom Left corner) -> Activate a Product on Steam. There type in your CD Key and the game will be activated and added to your Steam account game library.
Bonus Edition
Bundle
Bundle 1
Bundle 2
Bundle 5
Complete Pack
Pack X2
Pack X4
Standard Edition
Compare Choose & Buy Download (759)

Love this game, already buy it on steam but, i want to share it whit all my friends, recommended.

the combo system is very good and adictive i recommended ! :3