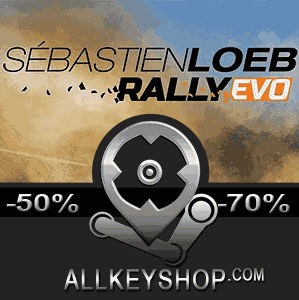 It's a digital key that allows you to download Sebastien Loeb Rally EVO directly to PC from the official Platforms.

How can I find the best prices for Sebastien Loeb Rally EVO CD keys?

Allkeyshop.com compares the cheapest prices of Sebastien Loeb Rally EVO on the digital downloads market to find the best sales and discount codes on trusted stores.

His is a serious competitor for WRC. Sebastien Loeb Rally EVO 5 arrives in stores and is dedicated to the greatest Rally Champion, nine time world champion, Sebastien Loeb.

Since Milestone worked on the WRC license, we can tell you that they know what they do. In this game you will not be limited to a single rally season but you embrace the history of the sport as a whole.

You will have fifty vehicles among which are the cars that made the rally legend. Several categories are available as Evo Rally Car, Modern Rally Cars Class R5, 2WD class, Production Class, ’70 Rally Cars…you name it, for a total of 11 different categories.

The only small problem, Milestone don’t have the right of the WRC, do not expect to find current drivers Ogier, Neuville and others.

An editor is also available so that each player can roll the wheel of a custom car. The game graphics are very clean and getting started is quite easy. The stages are identical to reality, if the game you come across a house is that it exists at the same place in the world.

Like all rally games, you find the full season mode, if you prefer to make one or two special it will also be possible, but nothing better than to compete online against real adeversaires or to be Sebastien Loeb himself and made the game mode dedicated to him. In short, this game is for the of rally fans, it offers great freedom of play and its content is complete.

Zoom 1m 3m 1y All
Track product
STEAM CD KEY : Use the Steam Key Code on Steam Platform to download and play Sebastien Loeb Rally EVO. You must login to your Steam Account or create one for free. Download the (Steam Client HERE). Then once you login, click Add a Game (located in the bottom Left corner) -> Activate a Product on Steam. There type in your CD Key and the game will be activated and added to your Steam account game library.
Special Edition
Standard Edition
Compare Choose & Buy Download (743)

Its an okay game, fairly worth buying if you arr into rally games

I think Gamesdeal.com
the best cd key stores
BTW I think the game is worth the experience