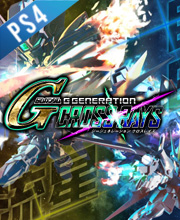 It's a digital key that allows you to download SD Gundam G Generation Cross Rays directly to Playstation 4 from PSN (Playstation network).

Grab a copy of the game and begin gathering your favourite characters from various Mobile Suit Gundam series to train, develop, and merge forces. The game comes with a unique system that allows players to create teams then experience the stories of various Gundam series.